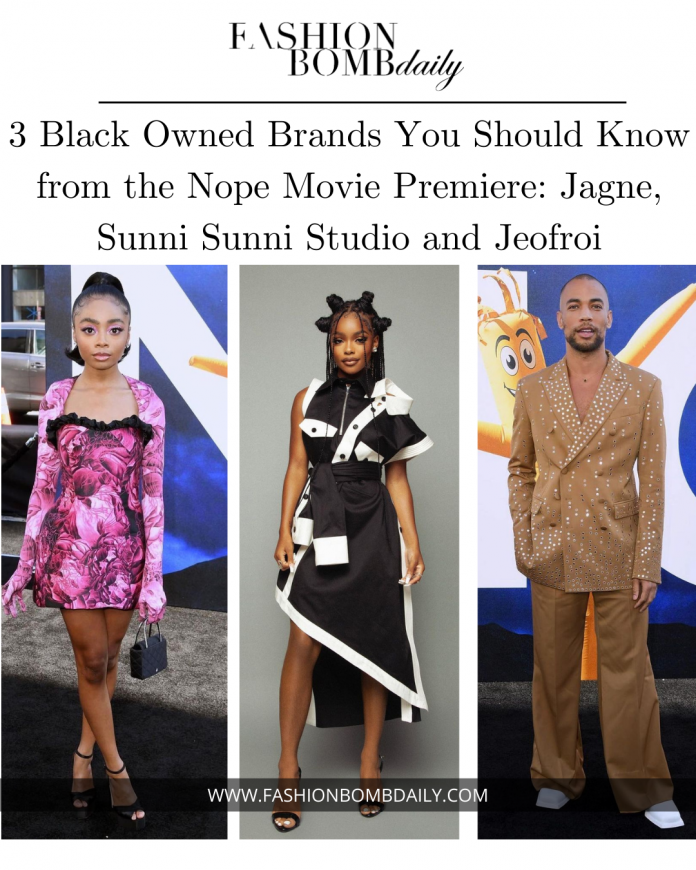 Jordan Peele has been instrumental in forging fresh and new ideas within the thriller genre, let alone as it pertain to black film at large. What better occasion than the Los Angeles premiere of the Nope movie to wear black designers proudly! A number of celebrities came dressed in up and coming African American designers for us to discover, so here are three black owned brands you ought to know about as seen at the premiere event:

Jeffrey and Roy are the designer duo inviting women to command and own the room, which is exactly what Skai Jackson and her stylist Monica Rose accomplished as she entered the Nope movie premiere in this opulent number. This design and every look from its collection were inspired by a woman’s gift of multiplications. “The idea that women have the power to cultivate, nurture and multiply not only her own gifts but the gifts of others,” says Jeffrey Taylor. “We wanted to display our love of classic silhouettes by creating moments that were impeccably sophisticated and lightly flirtatious.”

Founded in 2020, Jeofroi is a young label who prides themselves on their unmatched craftsmanship – the kind that you’d only expect from the most seasoned couturiers on the scene.

Baba Jagne originally created his eponymous line shortly after moving to the US in the 90’s before becoming a sought after pattern maker, designer and product developer for other brands. He gathers inspiration from his African roots and travels to conceptualize modernized designs.

Get the look: $690 Jagne The Conjoined Dress

When Kendrick’s stylist Rashad Minnick paired an eclectic Moschino suit with SUNNI SUNNI’s staple Reese Square Toe Boot, the overarching result was immaculate. Founder and creative director Sunni Dixon explained that “The inspiration for [the shoe] was uniformity.  The Reese boot is quickly identifiable and intended to be recognized as the SUNNI SUNNI silhouette. The details push the silhouette into a progressive form.”

As a brand, SUNNI SUNNI is inspired by life and the people that Dixon has personally experienced through it. He creates characters in different stories and fulfills their identities through their imaginative style combined with his unique design aesthetic. By pulling out the oddities in contemporary footwear, he’s able to design and visualize my footwear.

What do you think of these three designers?